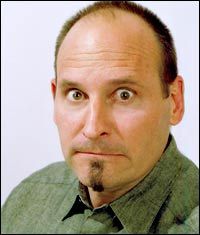 Jon Scieszka was appointed the first National Ambassador for Young People’s Literature in January 2008. The position was created by the Library of Congress to raise national awareness of the importance of young people’s literature as it relates to lifelong literacy, education, and the development and betterment of the lives of young people.

Born in Flint, Michigan, Scieszka earned a bachelor”s degree in writing from Albion College and a master of fine arts degree from Columbia University. He held a number of teaching positions in the first through eighth grades before taking a year off to develop ideas for children’s books. He is the author of several bestselling children’s titles, including The Stinky Cheese Man, which won a Caldecott Honor medal, The True Story of the Three Little Pigs, and the Time Warp Trio, a chapter book series. Scieszka is the founder of Guys Read, a nonprofit literacy organization.

“I read everything — comic books, newspapers, cereal boxes, poems — anything with writing on it. My favorite things to read are fairy tales, myths, and legends. When I’m not reading, I listen to music, watch cartoons, and sit in my chair and just think about stuff. I’ve always thought about being an author. One of the first books I read was Green Eggs and Ham, by Dr. Seuss. It made me realize that books could be goofy. It’s the book that made The Stinky Cheese Man possible!”